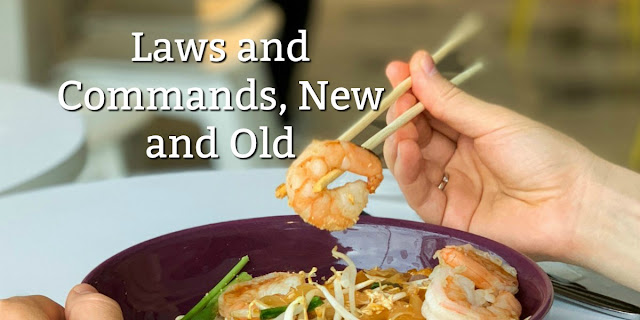 It's a popular "trick" for ex-vangelicals and atheists to discredit New Testament commands by comparing them to Old Testament laws.

For example, the late Rachel Held Evans claimed to be testing the validity of Scripture by reenacting certain commands for women. But she didn't differentiate between the old and new covenants. No wonder she concluded "Despite what some may claim, the Bible’s not the best place to look for traditional family values as we understand them today." To read a biblical response to her irrelevant "experiments" see Muddled Views of God, Women and Scripture.

It's not hard to understand the differences between Old and New Testament laws if we approach them without an agenda.

✔ Civil laws were given to govern the nation of Israel for a specific time in history: In order to set the nation of Israel apart from pagan cultures, God gave them strong laws. For example, the Old Testament nation of Israel held the death penalty for adultery (Leviticus 20:10). If you doubt the temporary nature of this law, read the story of Jesus and the woman caught in adultery (John 8:1-11). The principle is universal: adultery is a sin. But the punishment in Leviticus is not permanent.

✔ External dietary and cleansing laws: These were a "shadow of things to come," showing us that mankind is "unclean." Christ fulfilled these laws for us because He is the only One who can make us clean enough to stand in God's presence. Compare Leviticus 22:4-8 with Hebrews 10:1-25. The end of dietary laws is explained Mark 7:18-19, Matthew 15:11 and Acts 10:9-16.

Mark 7:18-19: “Are you so dull?” [Jesus] asked. “Don’t you see that nothing that enters a person from the outside can defile them? 19 For it doesn’t go into their heart but into their stomach, and then out of the body.” (In saying this, Jesus declared all foods clean.)

The words in parenthesis are in the Bible, not added. It is found in the original Greek.

1. External laws were fulfilled in Christ.

Galatians 2:21-23: “Do not handle! Do not taste! Do not touch!”? These rules, which have to do with things that are all destined to perish with use, are based on merely human commands and teachings. Such regulations indeed have an appearance of wisdom, with their self-imposed worship, their false humility and their harsh treatment of the body, but they lack any value in restraining sensual indulgence.

Matthew 15:11: What goes into someone's mouth does not defile them, but what comes out of their mouth, that is what defiles them."

2. Old Testament laws were important in our salvation process:
Galatians 3:23-25:  Before the coming of this faith, we were held in custody under the law, locked up until the faith that was to come would be revealed. 24 So the law was our guardian until Christ came that we might be justified by faith. 25 Now that this faith has come, we are no longer under a guardian.
If you look up Galatians 3:24 in multiple translations, you'll find the word guardian is also translated as trainer, tutor, schoolmaster, and teacher.
3. What does this mean for New Testament believers?
While explaining his methods for sharing Christ, Paul also helps us understand our responsibility as Christians: 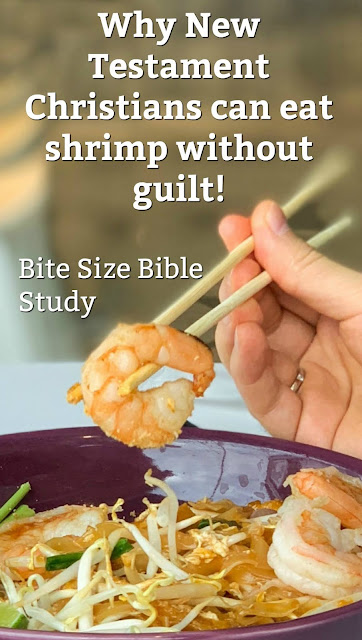 1 Corinthians 9:19-21: Though I am free and belong to no one, I have made myself a slave to everyone, to win as many as possible. 20 To the Jews I became like a Jew, to win the Jews. To those under the law I became like one under the law (though I myself am not under the law), so as to win those under the law. 21 To those not having the law I became like one not having the law (though I am not free from God’s law but am under Christ’s law), so as to win those not having the law.
Paul sometimes observed Old Testament dietary, cleansing, ceremonial, and sacrificial laws to put himself in a position where he could share the Gospel with Jews, but he makes it clear that he was no longer under those laws.
Those Old Testament laws didn't make him a better Christian and they didn't earn him salvation. No amount of law-keeping can redeem our souls.
But Paul explains that he is not free to do whatever he wants. He is under Christ's law, i.e. New Testament commands.
Eating shrimp was sinful for Old Testament believers because it violated God's laws, but the shrimp in and of itself didn't change a man's moral character. New Testament commands deal directly with our hearts, minds, and souls.
Following New Testament commands is a proof of our love for Christ, a proof that we have truly repented of our sins, a proof that we have been redeemed. We will not follow them perfectly because we are all in a process of renewal, but genuine believers will move toward that goal.
John 14:21: Whoever has my commands and keeps them is the one who loves me. The one who loves me will be loved by my Father, and I too will love them and show myself to them.
1 John 5:3: In fact, this is love for God: to keep his commands. And his commands are not burdensome.

If you would like to do a more thorough study of how the law impacts Christians, I encourage you to study Romans 7, Romans 10:4, Ephesians 2:14-16, and Galatians 2:16.