6 Types of Liars Identified in 1 John 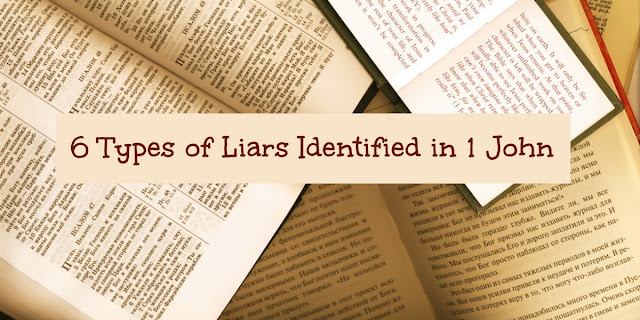 1. People claiming to have fellowship with Jesus but walking in darkness (1:6). Ephesians 5:6-16 explains the contrast between worldly darkness and Christian light.

2. People who claim they haven’t sinned (1:10) because they've redefined sin according to culture’s standards, calling God a liar.

4. People who claim to walk in light while hating their brothers (2:9; 4:20). If we can’t love Christians from different backgrounds, denominations, races, and cultures, we don't know Christ.

May we stand firm against these lies.

1. The first 5 liars John describes are "weeds" in the church: people claiming to have fellowship with Jesus, claiming to walk in the Light, claiming not to have sinned, claiming to love God. 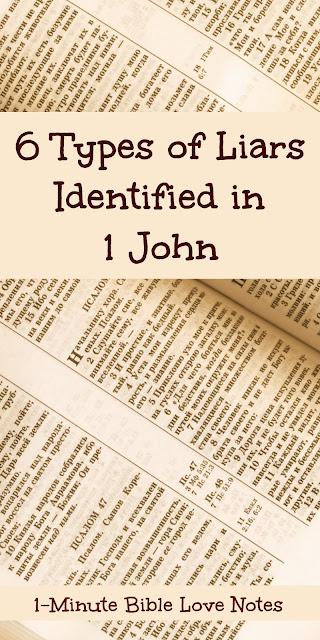 Matthew 13:24-30: Here is another story Jesus told: “The Kingdom of Heaven is like a farmer who planted good seed in his field. 25 But that night as the workers slept, his enemy came and planted weeds among the wheat, then slipped away. 26 When the crop began to grow and produce grain, the weeds also grew. 27 “The farmer’s workers went to him and said, ‘Sir, the field where you planted that good seed is full of weeds! Where did they come from?’ 28 “‘An enemy has done this!’ the farmer exclaimed. “‘Should we pull out the weeds?’ they asked. 29 “‘No,’ he replied, ‘you’ll uproot the wheat if you do. 30 Let both grow together until the harvest. Then I will tell the harvesters to sort out the weeds, tie them into bundles, and burn them, and to put the wheat in the barn.’”

I find it interesting that Jesus says uprooting the weeds might uproot some of the wheat. Think of the ways that weeds damage a healthy garden. How might that apply to people in the church who are compromised, unrepentant, and self-serving?

2. Another passage talks about outward forms of godliness:

2 Timothy 3:1-5: But mark this: There will be terrible times in the last days. 2 People will be lovers of themselves, lovers of money, boastful, proud, abusive, disobedient to their parents, ungrateful, unholy, 3 without love, unforgiving, slanderous, without self-control, brutal, not lovers of the good, 4 treacherous, rash, conceited, lovers of pleasure rather than lovers of God— 5 having a form of godliness but denying its power. Have nothing to do with such people.
copyright 2017, Gail Burton Purath, BiteSizeBibleStudy.com 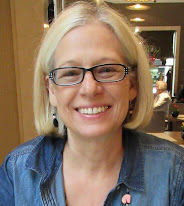